Cuban Makers at "Copincha" in Havana

Last week I found myself in front of a room full of Cubans in Havana, delivering a course on Arduino in broken Spanish. Was this a variation on the kind of dream where you are sitting down to an exam without having done a stroke of revision? Or the dream where you find yourself at work having forgotten to put on your trousers? 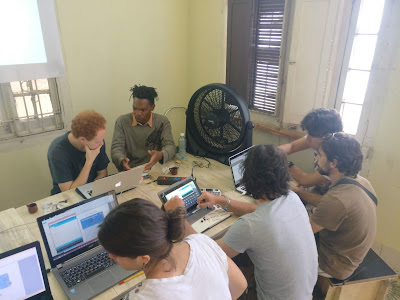 The sequence of events that led to this radical departure from my comfort zone - not so much stepping outside it, but more waving it goodbye and jumping on a plane - started a couple of years ago when I was contacted by Jonnet who had seen a Spanish language edition of one of my books and wanted to borrow it for her Cuban partner Mauri.
Mauri and Jonnet were keen to establish some kind of makerspace in Havana to provide a place for local makers could come and share ideas, tools and resources. Cubans, by necessity, are an inventive and creative group of people. Resources are scarce and so a make-do-and-mend culture is totally natural to them. If ever there was a race of makers, it is probably the Cubans.
My wife Linda and I have been learning Spanish for years despite little evidence of success. We also spent our honeymoon in Cuba and have very fond memories of the country. And so, to cut a long story short, in a rash moment I volunteered to run an Arduino course at their makerspace when it was up and running. And a year or so later, that is how I found myself in front of a group of Cubans, talking about Arduino in Spanish.
Mauri, the driving force behind the makerspace also lives in the house containing the makerspace in quarters above the two rooms that make up the space.  The space is called "Copincha" - "pincha" is Cuban slang for "work" and so "copincha" is a way of saying "co-work".
Mauri and friends have used scrap wooden packaging cases to make box stools for sitting on as well as large work tables with table-tops that are removable to reveal ample storage space for tools and supplies to make best use of the space. There's probably ten square meters of table top and maybe twenty stools for sitting on. That is quite some labour of love! 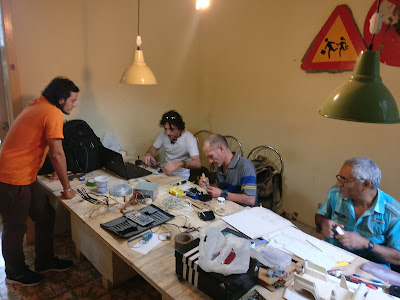 My Arduino course was the first course to be run at the makerspace and since we had mixed levels of ability, with some very skilled Arduinoistas, I ran introductory Arduino lessons in the morning and in the afternoon offered "consultations" to the advanced groups who had projects that they wanted to work on.
I brought Arduino compatibles (actually MonkMakesDuinos) together with basic component kits and breadboards with me but the course relied on the students having access to a laptop to program the MonkMakesDuinos. In true Cuban style, this involved a fair amount of borrowing and inventive solutions. For example, one student used a homemade Raspberry Pi laptop to program the Arduino. Another used a Windows tablets with a pop-up keyboard. With sharing and cooperation everyone was able to participate.
I am very pleased to hear that the course is due to be repeated in July (when many Cubans are on leave from their day jobs). This time, the course is being delivered by Yusinier, one of the local experts at the course who amongst his many skills in art and technology has taught Arduino to university students.
The course and supporting code is available as open source on GitHub here and I would very much welcome any pull-requests to improve the Spanish.
Here are just a couple of the things that the course attendees made during the course:
Juan, a retired mechanical engineer with a passion for replica cars, worked on adding automation to a fibre-glass modelled replica he was building from scratch. 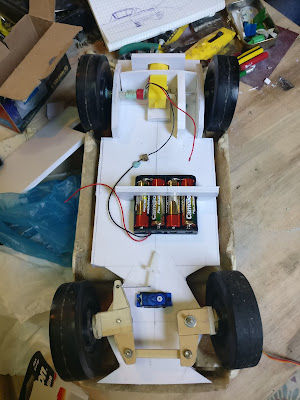 The chassis of the car was built to use a single gear-motor as rear-wheel drive and a servo motor to control the steering. This was combined with an ultrasonic range-finder to detect obstacles and invoke an avoidance function that involved a randomly chosen turn to the left or the right, followed by reversing. The design also included automatic brake lights. The steering mechanism was made entirely from waste pieces of plastic and skilful use of a Dremmel.
Juan has an enormous collection of vintage model cars that he restores, some of which are for display and some for sale at a shop he runs with friends, at San Lázaro 1060 entre San Francisco y Espada - somewhere around here.
Yusinier is a visual artist and film maker and amongst other things has to devise his own props, such as remotely triggered fake bullet strikes. He often uses Arduino and his project during the course was the controller for a motorized camera dolly. 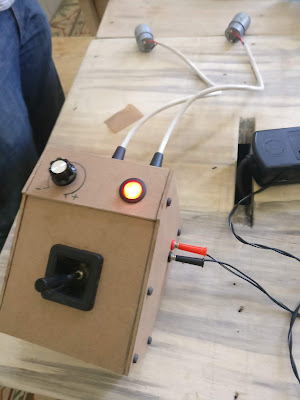 In England, when I need components, an Arduino or a cheap module from China, all of these things are easily obtainable with a few clicks of a mouse. This is not so easy in Cuba. For most Cubans a £30 Raspberry Pi represents more than a months pay. Even if they want one, they cannot just order it from Amazon or any of the other sources that we take for granted. Typically, getting such things into Cuba relies on visitors to Cuba like us bringing things with us when we visit. Donating things as personal gifts to Cubans. Visitors to Cuba are advised in the guide books to bring crayons, bars of soap and Lego as gifts so why not things for makers? 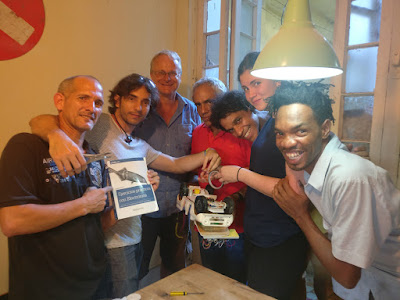 Perhaps if you are planning a trip to this beautiful country and will be visiting Havana, you could contact Mauri (maurice.haedo@gmail.com) and see if he could make use of a few Arduino clones, or eBay specials for "Copincha". If you do, you will be assured of a warm welcome a great coffee and a glimpse behind the scenes of  this amazing country.
Posted by Simon Monk at 7:38 AM