Analog Sensors without Analog Inputs on the Raspberry Pi

The Raspberry Pi does not have any analog inputs, but that does not mean that you can't use some types of analog sensors. Using a couple of resistors and a capacitor, you can use a "step response" method to measure resistance. Which is just great if you are using a pot, photoresistor or thermistor. 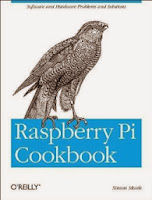 The Recipe that follows is taken from my new book "The Raspberry Pi Cookbook". This way of using sensors was inspired by this work from Adafruit.

Open an editor (nano or IDLE) and paste in the following code. As with all the program
examples in this book, you can also download the program from the Code section of
the Raspberry Pi Cookbook website, where it is called pot_step.py.

When you run the program, you should see some output like this:

The reading will vary between about 10 and about 170 as you rotate the knob of the
trimpot.

Discussion
To explain how this program works, I first need to explain how the step response technique
can be used to measure the resistance of the variable resistor. 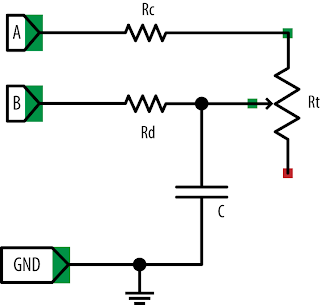 This way of doing things is called step response because it works by seeing how the circuit
responds from the step change when an output is switched from low to high.

The steps involved in taking a reading are first to discharge the capacitor through Rd
and then to let it charge through Rc and Rt.

To discharge it, connection A (GPIO 18) is set to be an input, effectively disconnecting
Rc and Rt from the circuit. Connection B (GPIO 23) is then set to be an output and low.
This is held there for 5 milliseconds to empty the capacitor.

Now that the capacitor is empty, you can start to allow charge to flow into it by setting
connection B to be an input (effectively disconnecting it) and then enabling connection
A to be a high output at 3.3V. Capacitor C will now begin to charge through Rc and Rt.
The while loop will then simply count as fast as possible until the voltage at connection
B switches from being low to high at about 1.65V. At that point, the counting stops and the count value is returned.

The figure below shows how a resistor and capacitor in this kind of arrangement charge and
discharge as the voltage is toggled between high and low. 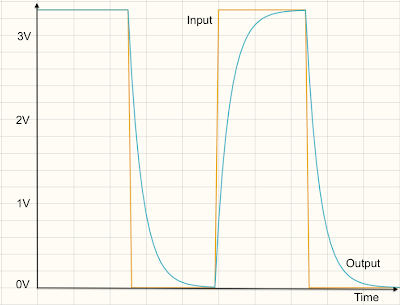 You can see that the voltage at the capacitor increases rapidly at first but then tails off
as the capacitor becomes full. Fortunately, you are interested in the area of the curve up
until the capacitor reaches about 1.65V, which is a fairly straight line, meaning that the
time taken for the voltage across the capacitor to rise to this point is roughly proportional
to the resistance of Rt and hence the position of the knob.

This approach is not hugely accurate, but it is very low cost and easy to use.

This is great! I kept searching online for a way to read soil moisture hygrometer that I bought off eBay. It comes with an analogue and digital output, but the digital output only does 1 or 0 and nothing in between regarding the moisture percentage. All the online searching was recommending going down the route of an analogue to digital converter chip that I find more cumbersome because I want to have about 10 sensors. Now, I think it could work with this technique where I don't use the provided outputs at all and connect directly to the electrodes that I stick in the ground.