5 Stars! The best thing to come out of Australia since Rolf Harris!

I was given one of these boards at Android Open, and rather like the IOIO of my previous Blog, I have only just got around to having a play with it.

It is intended as an alternative to the Android ADK reference board which is Arduino Mega-based and so probably overkill for most Android Accessories that you are likely to make. The USB Droid is far more practical in size. 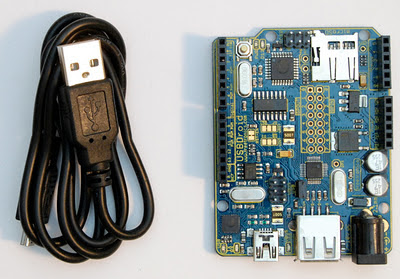 It comes in a nice retail pack, with a Mini USB lead which is used to connect it to your computer rather than the 'normal' Arduino USB-B connector - good choice.

And that is where the magic starts...

The board is extremely well made, and well thought out. When I plugged the Mini USB into my computer I was surprised to see a green LED light along with the blue power LED. 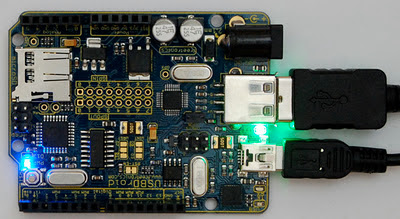 The green LED is labelled VBUS and yes, the USB 5V is passed through from your computer and out of the USB-A connector to your phone. A really nice touch as you don't have to use an external power supply while you are developing.

I am not sure Putting a Micro SD card on there is much use for making Android accessories, as effectively all the storage of the phone is available to you. But I guess you could make a data logger that worked off-line until you connected it to the Android phone to send the data to Pachube. Also it could come in handy for other types of USB host projects.

I have a minimal Android Open Accessory test app that I describe in my Arduino + Android book. You can download it from here (the app that is, not the book). There are also slides from my talk at Android Open here that describe the app. All it does is send a number to the Arduino that increments it and sends it back.

The sketch installed and ran perfectly. 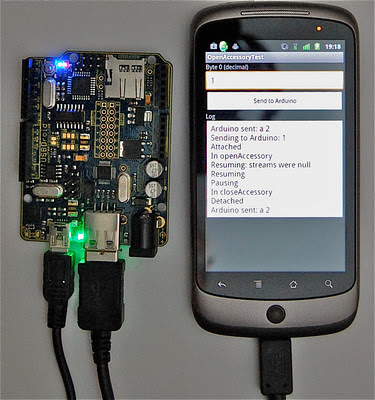 I am very impressed with this board,  its certainly a lot neater than an Uno with a USB host shield on the top.

I see that Freetronics have done similar things with an Ethernet board. I look forward to trying out one of these.

Thanks for the info! Just getting started with Arduino but I like the size of this Arduino, it's much more practical in size especially if it is paired with an Android device.

Just preordered your new book! Looks like a fun one!

Real helpful work indeed.Hope it will work with great efficiency.Any update should be available here and congrats for the work.....